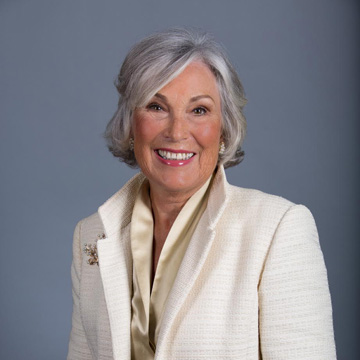 Susan Peterson is the Founder of The Communication Center. A talented and dynamic communicator, Susan draws from her media experiences to enhance the communication management skills of her clients around the world. Susan established TCC in 1983 after a decade as a network television correspondent for CBS and NBC News. Based in London for six years as CBS’s first female foreign correspondent, she covered political and economic events in Europe and the Middle East. Peterson also hosted and produced two major American talk shows interviewing celebrities, authors and key business leaders.

For four years, Susan served as the Chair for the Board of Trustees for her alma mater, Wayland Academy, a college prep school in Beaver Dam, Wisconsin. She was the first female chair in 155 years. She is also a past chair and board member of the Center for Women’s Business Research, a leadership and research organization formerly known as the National Foundation for Women Business Owners. For five years Susan was a bank director for Century National Bank, now United Bank, and is a member of Leadership Greater Washington, serving as Vice President of Communication, currently.

Susan earned her undergraduate degree in creative writing and English literature at Denison University. She is certified by the three-year Owner/President Management Program (OPM) at The Graduate School of Business Administration of Harvard University. Stories about TCC have appeared in such publications as The Washington Post, The Washington Times, The Washington Business Journal, The New York Times, Investors Business Daily and Vital Speeches of the Day.